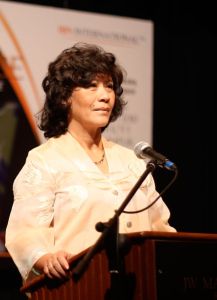 Dr. Noeleen Heyzer, a social scientist, was former Under-Secretary-General of the United Nations and the highest ranking Singaporean in the UN system (2007-2014).

She was the United Nations Secretary-General’s Special Adviser for Timor-Leste, working to support peace-building, state-building, and sustainable development.

She was the first woman to serve as the Executive Secretary of the United Nations Economic and Social Commission for Asia and the Pacific (ESCAP) since its founding in 1947. Under her leadership (August 2007-January 2014), ESCAP has grown in profile and stature, focusing on regional co-operation for a more resilient Asia-Pacific, founded on shared prosperity, social equity, and sustainable development. She was at the forefront of many innovations including for regional disaster preparedness, inclusive socio-economic policies, sustainable agriculture and urbanization, energy security, regional connectivity and integration as new drivers of growth.

As the Executive Secretary, she strengthened ESCAP’s capacity and effectiveness to support the countries of the region, using its convening powers and standard-setting authority, rigorous analysis, technical and policy assistance to build the economic and social foundations for inclusive and sustainable development. She worked with key political leaders and decision-makers in 54 Member States to shape regional policy agendas for Asia Pacific’s transition towards sustainable and shared prosperity, and established regional cooperation mechanisms to address the “new normal” of volatility, such as the food-fuel-finance crises and climate change. She focused on harnessing development opportunities through multi-stakeholder alliances and partnerships to sustain development gains, reduce poverty and inequalities, transforming the quality of people’s lives.

Among the many significant achievements of the region, under her tenure with ESCAP, have been groundbreaking intergovernmental agreements on a regional intermodal transport and logistical system, especially for landlocked developing countries; and initiatives such as Regional Connectivity including assistance in the formulation of ASEAN’s Connectivity Master Plan, exploration of an Asia-Pacific Energy Highway, an ICT super-highway, and the negotiation supporting the new Silk Route of economic development in Central Asia. Other major milestones are the regional action plans on inclusive socioeconomic policies and social protection; the strengthening of vital statistics and civil registration; financing and technology for an inclusive and green future; the building of productive capacities of Least Developed Countries, secure employment in vulnerable communities, and the empowerment of women and youth. She was also responsible for the establishment of ESCAP’s works on resilience to man-made and natural disasters, and the stewardship of water, energy and natural resources especially for small islands states, least developed and landlocked countries.

In 2009, Dr. Heyzer led an unprecedented dialogue with Myanmar’s leaders on development and poverty reduction, resulting in the Government of Myanmar requesting the formation of a development partnership that has allowed practitioners and eminent international scholars, such as the Nobel Prize economist Professor Joseph Stiglitz, and local researchers to exchange experiences and ideas with government agencies and civil society. This has been regarded by many as helping to catalyze the opening-up of the country from its former isolation. In 2008, she also worked closely with ASEAN, the Government of Myanmar, and the UN in the recovery efforts assisting cyclone-affected people in the Ayeyarwady Delta.

Prior to her appointment to ESCAP, Dr. Heyzer was the first woman from the South to head the United Nations Development Fund for Women (UNIFEM). She became its longest serving Executive Director for 13 years (October 1994–August 2007), transforming it from a small entity to a powerhouse leading in women’s empowerment and gender equality.

Through her leadership, UNIFEM assisted over 100 countries in the formulation and implementation of legislation and policies that promote women’s security and rights. This resulted in the removal of discriminatory practices, changes in inheritance laws for women, better working conditions for migrant workers, full participation for women in several peace negotiations and electoral processes including in Liberia, Rwanda, Burundi, the Democratic Republic of Congo, South Sudan, and Timor-Leste, and the inclusion of women as full citizens in the constitution of Afghanistan.

Dr. Heyzer played a critical role in the Security Council’s adoption and implementation of the landmark Resolution 1325 (2000) on Women, Peace and Security, undertaking extensive missions to conflict-affected countries worldwide. She was responsible for the establishment of the United Nations Trust Fund to End Violence Against Women and for appointing Actress Nicole Kidman as UNIFEM’s Goodwill Ambassador to campaign against this violence. She led UNIFEM’s restructuring to maximize organizational performance. Consequently, UNIFEM increased its resources tenfold, strengthened its programmes, ground presence and team leadership, and successfully advocated to put issues affecting women high on the agenda of the whole United Nations system.

She and her team were instrumental in the establishment of UN Women (the successor to UNIFEM) – to ensure that the United Nations will always have a strong institutional voice for women at its highest decision-making table.

Dr. Heyzer has served on numerous boards and advisory committees of international organizations, including the UNDP Human Development Report, UNDP Eminent Persons Group on Trade and Sustainable Development, the G77’s High-level Panel of Eminent Personalities of the South, the Asian Development Bank’s Eminent Persons Group, Board of Trustees of the National University of Singapore, Governing Board of the Lee Kuan Yew School of Public Policy, the Kofi Annan Global Commission on Elections and Democracy in the Digital Age, the Global Commission on Forced Displacement, Asia Global Institute Advisory Board, Trustee of The Asia Foundation and Advisor to the World Leadership Alliance, Clue de Madrid.

She was a founding member of several international women’s networks and has published extensively on gender and development issues, especially economic globalization, international migration and trafficking, women, peace and security. She convened and chaired the International Women’s Commission for a Just and Sustainable Palestinian-Israeli Peace and was on the High-level Commonwealth Commission on Respect and Understanding chaired by Nobel Laureate Prof. Amartya Sen. She was a jury member of US Secretary of State Hillary Clinton’s Innovation Award for Women’s and Girl’s Empowerment, 2010. Dr. Heyzer has also advised private sector partners such as Macy’s, CISCO, and the Calvert Investment Fund to provide high value employment and market access to women and youth in conflict and disaster-affected areas as well as in the Arab States, setting new standards for ethical investment.

As the highest ranking UN official, Dr. Heyzer was also responsible for the security and safety of the UN system, staff and their families in Thailand during the intense political violence that regularly erupted over her six year tenure, and during the country’s worst floods in 2011-2012.

Born in Singapore, Dr. Heyzer was the top sociology student of her year, holding a Bachelor of Arts (Upper Hons.) and a Master of Science from the University of Singapore. She obtained a Doctorate in social sciences from Cambridge University in the United Kingdom.

She has received numerous awards for leadership.